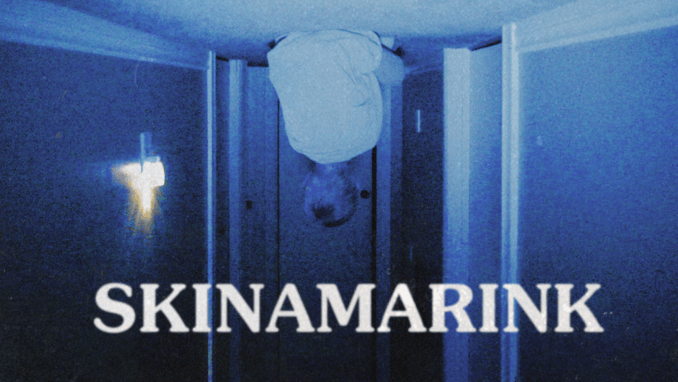 One of the films that I’ve been most interested in reviewing lately, is Skinamarink. I saw the trailer for it when I saw Violent Night in theaters, and the trailer blew me away. When I saw that it was making a limited theatrical run in January 2023 before hitting Shudder for a home release in late 2023, I just had to check it out and do a Skinamarink review.

Kyle Edward Ball made his short film “Heck” 2 years ago, and it served as a proof of concept for what would become Skinamarink. The full feature has been labeled an experimental feature film, and while it has a lot of scenes that are effective, keep in mind that it won’t be entertaining in the commercial sense, and this simply isn’t a cop out from the distributor to discount your taste in films. There are a lot of camera angles of things like walls and baseboards, where one can only hear what is going on and see light reflecting off of the television set. The audio is often hard to make out, so there are subtitles throughout much of the film. A lot of the shots are drawn out and 100 minutes of grainy footage proved to be a little too much for the couple sitting next to me in the theater.

While the goal is to provide a Skinamarink review, I’d also like to remind one that they must pay attention to every little detail. The details were inserted on purpose and each one moves the story forward. This is a very interesting film to check out, but I would recommend that most people watch this when it hits a streaming platform. It might need to be broken up into viewing sections and it’s quite a bit to digest. Check out the trailer below and continue down for some spoilers.

It would be hard to include a Skinamarink review without including a few spoilers, so I wanted to include them in a clearly marked section at the end. The main key points that I took away from the film were that when Kevin’s Father was explaining how Kevin fell and hurt himself in the beginning, but we are being given a sanitized version. It would appear that Kevin ends up going into a coma, which is supported by the “573 days” caption that appears later on in the film. While Kevin is in the coma we experience the nightmare within his head, where the house that he lives in keeps him hostage while a monster sets up and tortures him and his sister Kaylee. While depressing, it was filmed effectively and really conveys the fear that Kevin and Kaylee experience while being held hostage. A monster replacing one’s parents is a common childhood nightmare, and the film does a great job at reminding us of that fear.