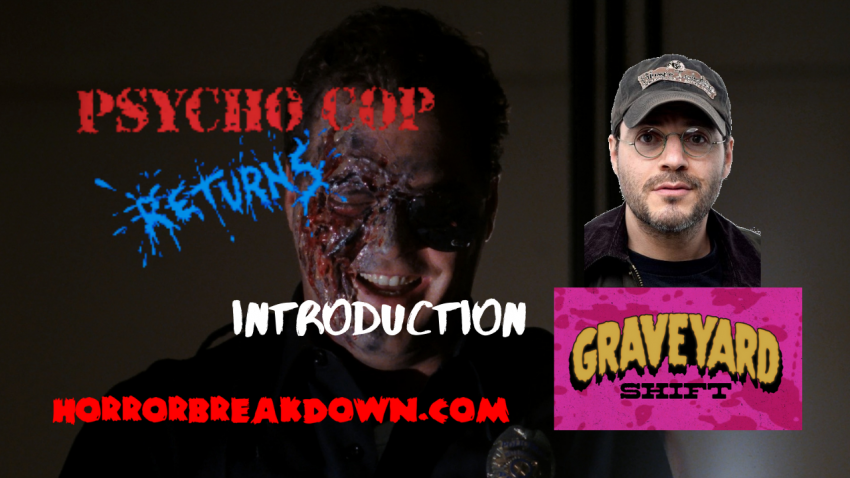 There’s something magical about coming across a really fun movie for the first time that leaves you laughing and smiling. I realize that it’s going to depend on what you like to watch, but Psycho Cop Returns is definitely one of those movies for me. The unrated version has everything that you could want from a fun movie like this, including violence, loads of nudity, and bad puns.

Alamo Drafthouse has their weekly event titled Graveyard Shift, where every Friday you show up and they screen a horror movie, and sometimes a double feature. I’ve been to a few of these showings, but I hadn’t ever seen Psycho Cop Returns before, I’d only heard of it. Since the director Adam Rifkin was going to be in attendance, I figured I’d give it a try.

After the director Adam Rifkin gave us a quick introduction we watched the movie. Vinegar Syndrome did a great job with their 2K restoration of the film and it was great seeing the unrated version as it was intended, before cuts were made to bring it down from its NC-17 rating.

I don’t want to give much about the movie away, but it you’re a fan of over the top violence, nudity, and a guy named Brian that over-acts his scenes, then you’ll love this movie. Adam directed Psycho Cop Returns under the nom de plume Rif Coogan (the same name that he also directed the Invisible Maniac under), and although it’s more over the top than his more mainstream films, it’s definitely an awesome gem that he should be proud of.