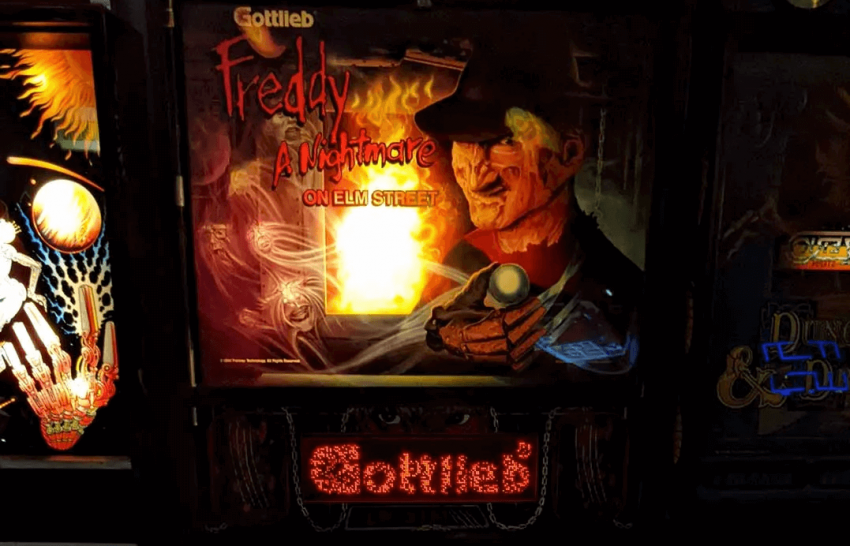 Whenever you’re about to play a new pinball machine, you would ideally look to the bottom left corner of the machine and read all of the instructions. If you’re like me, then you’ll probably skip all of that the first time and simply “hit what’s lit.” One of the scariest older pinball machines that I’ve come across is the Nightmare on Elm Street Pin from Gottlieb. Between the music, Freddy’s banter, and the flashing lights, it’s a creepy fun play.

The Nightmare on Elm Street Pin from Gottlieb was released in October 1994, by Gottlieb & Co, with 2800 units manufactured.

It’s pretty easy to make the skill shot, which starts the first Nightmare, because all that you have to do is plunge the ball into the blinking boiler room. You’ll need to watch out to make it directly in though, since the door will move up and down to deflect the ball. There’s a huge Freddy head in the upper left part of the game that spits out the ball when it circles around him. One major goal is to hit the lit sections that his head sits on top of, which give you bonus features, including spelling out the word CLAW. Once you spell CLAW by hitting the lit sections, you’ll have the ability to push a button right below the button for the right flipper, which will save the ball a single time from exiting through the drain down the middle. If you don’t use the claw, then you’ll receive an extra 10 million points. The main goal of the game it to start Nightmares, then kill Freddy in each nightmare. Check out the rules for the game via IPDB.

Besides the physical machine that was released in 1994, there is a digital VP9 table that was ported to a VPX table, but it requires a ROM (freddy.zip) that is now hard to find, since Gottlieb issued a cease and desist for all Gottlieb ROMs to be taken down. Here’s more information on the digital version, but check out the video below to see tournament play for the actual table.