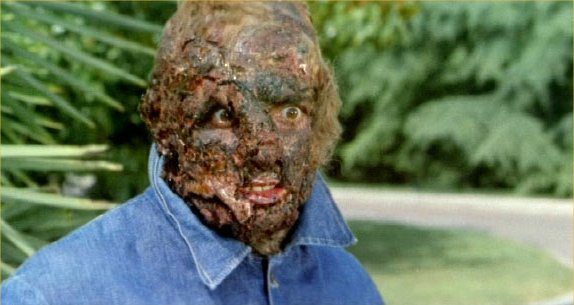 It’s hard to put my finger on what exactly is so great about Nightmare City, AKA City of the Walking Dead, because there’s so much that I love about it. Is it Hugo Stiglitz’s character Dean, how he slaps his wife to calm her down, in classic ’70s style? Is it the surgeon who tosses his scalpel into one of the radioactive people? The gratuitous nudity? The soundtrack? The awkward dubbing? Well, it’s all of it. It’s the obvious effort and seriousness that was put into making a great movie, and the end result which is infamous for everything that I’ve mentioned and more.

If you’ve never seen the movie before (no spoilers), it revolves around Dean and his wife’s attempt to escape the City of the Walking Dead. Now they’re not actually dead people, they’re infected, radioactive people. The movie was made during a very tense time, specifically the Cold War. If either the United States or the Soviet Union decided to attack each other, it could have easily meant that life on earth would be impossible to continue. The director, Umberto Lenzi, revealed in a commentary track about how the movie was a cautionary tale regarding radioactive fallout. Thankfully, the tide has changed and it’s not as concerning as it used to be, but the film still lives on.

Our infected people look more like hamburger meat, they have super strength, and they’re able to take a lot more damage than regular people are able to keep going. They also rely on the plasma from blood for life and need a constant supply of it.

The soundtrack has some pretty dated music, but the main theme is pretty catchy. You hear it over and over in the movie, sometimes in different tempos.

This movie has most everything that you could want from an exploitation film. It’s got violence, gore, nudity, awkward dubbing, and crazy scenes. I highly recommend that you get your hands on the Blu-ray from Arrow Video, as it has a brand new 2K restoration version and also the alternate HD transfer from the 35mm reversal dupe negative (which is a little softer).