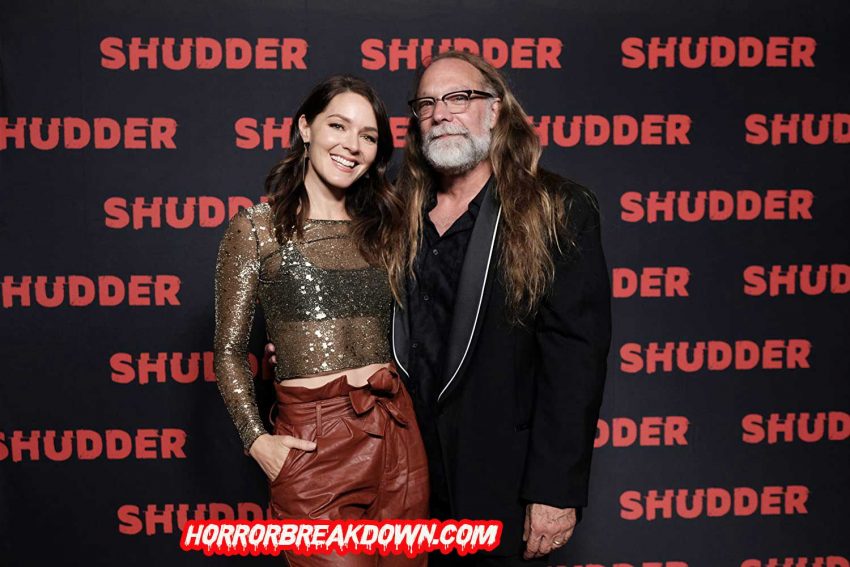 In this Hannah Barefoot interview that was conducted in the Shudder Horror Fans group, we had a lot of questions regarding her role in the Creepshow TV series on Shudder, where she had a starring role in the episode “Night of the Paw“, alongside Bruce Davison. She is a theatrically trained actress, singer, and dancer and was gracious enough to answer our questions in the group.

Question: Had you actually seen any of the original Creepshow content prior as a youth? Or did you watch to research the show prior to getting the role?

Question: Is horror a genre that you enjoy working in? Is Stage or film your favorite?

Hannah: I love working in horror! Honestly, I can’t watch most horror films because the visuals stay with me and keep me from sleeping, but working in them is an entirely different story. I am the biggest fan of the artists who create horror, especially the makeup and effects people, because I think their level of skill is so high. To create something that looks and feels so real and that makes an audience 100% believe what is happening, while in real life those who are a part of it are also 100% safe – that’s real creativity. I love being around horror creators for that reason.

Musical theatre was my jam when I was a kid and falling in love with acting. I wanted to be the new Rita Hayworth or Esther Williams.

Question: What was your favorite part about the production? And what was the most challenging part?

Hannah: Oh man. The most challenging part was the scene at the very top where I was crawling out of the upside down car in the pouring rain. We filmed in February, and with that rain machine on full blast, it was COLD. It was also around 3 am at that point and we did as many takes as needed to get it right. But it was fun, too. I loved every part of making that show, even the challenging parts. Working with Bruce was great, as was John Harrison and Greg Nicotero. The people were my favorite, I’d say. But I also really, really loved peeling out of the driveway in the hearse. I gunned it really hard and that was a blast.

Question: How many days did they give you guys to film the episode? Did you keep any props?

Hannah: I think we had 5 days for our episode, which was really quick. Some of the other episodes only had three. I’m used to working on shows where an episode has eight or nine days. But the people on this set were skilled enough to handle it, and everyone did their job so well.

They let me keep my black trench coat! That’s pretty rad. And the underwear, of course 🙂

Question: Were all the interior scenes shot in the same house? If so that must have been quite a house!

Hannah: Yes, all the house interiors were shot in the same big, beautiful Victorian home in Jackson, GA. The operating room and morgue scene were shot in a soundstage in Atlanta.

Question: Are you going to be involved in the next season in any more episodes?

Hannah: I wish! Because it’s an anthology episode, each episode is different with different actors. Don’t think I didn’t pitch the idea of them bringing back all the actors for different stories though! If only … 🙂

Question: When you’re filming horror, is there a different feeling to the shoot or does it seem pretty typical?

Hannah: All sets have that wonderful creative energy buzzing around, but there’s something different with horror sets. There’s usually a feeling of ‘Will it work?’, though, which is really fun and energetic, because the success of practical effects are all on the line, and sometimes you might only have one or two takes with a certain prop before it’s used up. And in horror, I’m usually really tired at the end of the day because I’ve been screaming so much and running around. Horror shoots require some recovery 🙂

I’m such a fan of practical effects, because they’re such a genuine representation of movie magic. I loved working with the team on Creepshow so much. The K+B crew (the team behind the effects) are absolutely incredible, and they tried really hard to make our episode as practical as possible. For instance, in the scene where I throw the paw into the fire, we tried over and over to use a real substance on the paw that would create a real green flame (I think it was phosphorus) when it ignited, but we couldn’t quite get the paw to land correctly when I threw it in. They did ultimately have to use some cg effects, but I know their goal was to be as practical as possible. Big fans of those guys.

Question: What is your favorite genre to act in?

Hannah: Hmmmm, that’s a tough one. I love dark comedy, like FARGO, but I also love big musicals like THE GREATEST SHOWMAN. I want a career that’s full of both of those things. I think basically, I love genres that involve a lot of imagination and make you feel like you’re playing.

Question: Do you have any funny Bruce Davison stories that you can share?

Hannah: Bruce was a treat. He’s such a terrific actor, and we basically hung out the whole shoot talking about his several decades worth of incredible acting, amazing people he knows, Academy Award nominations, you know, nothing major 🙂 . He’s a genuine star. This photo (below) was from right after we wrapped.

Question: Is there anything that we as fans of your work can do to help your career?

Hannah: Oh, man, that’s so sweet! Thank you for asking. Fans help out a lot just by being present! Networks look at followers and press, so it’s actually a big deal to have fans who stick around and are enthusiastic. You can follow me on Instagram at @hannahbarefoot (Where I am mostly, much more than FB or Twitter). And if there’s a show you really love and think I should be in, you can reach out to them via social media! Honestly, fans are a big deal and I genuinely appreciate them (you).

Thanks Hannah for taking the time to chat with us. You can follow her on Instagram if you’d like to keep up with her and we look forward to her future projects!