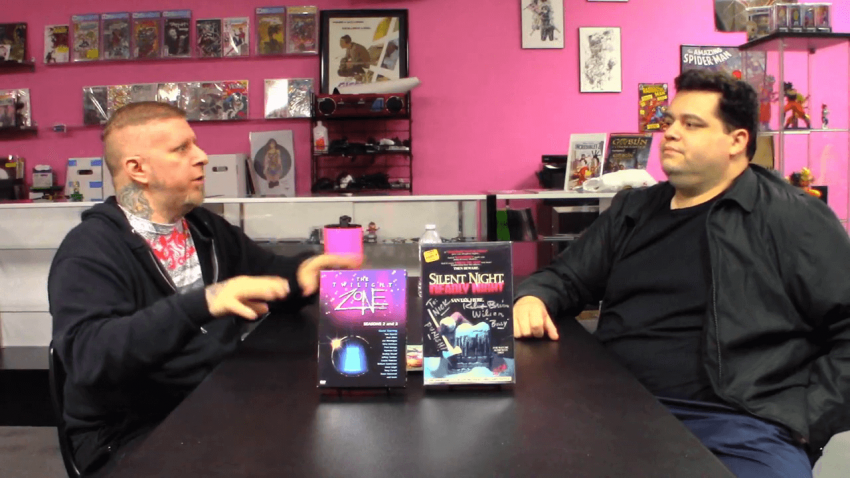 Earlier this week, I had the pleasure of recording a YouTube video for Shop Talk with Fun Stuff Comics. We had a great time going over movie topics like Silent Night Deadly Night, Black Christmas, the Invisible Maniac, Donald Farmer Movies, Satan’s Black Wedding and much, much more. This was my second time on the show and you can checkout my first time here.

Addressing some of the topics that I cover in the interview, I met Billy, played by Robert Brian Wilson, at Texas Frightmare Weekend 2016. He was very nice, talked with us a long time, and signed my big box release!

We also went over a couple films from Nick Millard, specifically Satan’s Black Wedding, which I covered in an earlier post as well, and is a true grindhouse classic. However, one of my favorites is The Invisible Maniac. It’s a film directed by Adam Rifkin, who also directed Psycho Cop Returns, and is tons of fun! It’s about a sex-crazed professor who seeks revenge and stars the beautiful Melissa Moore and Savannah. Checkout the trailer below.

The Invisible Maniac has yet to get a proper DVD release, but has been released on VHS by Republic Pictures Home Video in the past. You can stream it via Amazon, but it’s only available in standard definition.

We’ve got so much media coming at us nowadays, that it can be really hard to just settle in and pick something. Netflix found that it takes the average person 17 minutes to choose a movie from their interface. Since we all have so many options, thanks for taking the time to listen to the video interview and get a glimpse into movies that I enjoy.