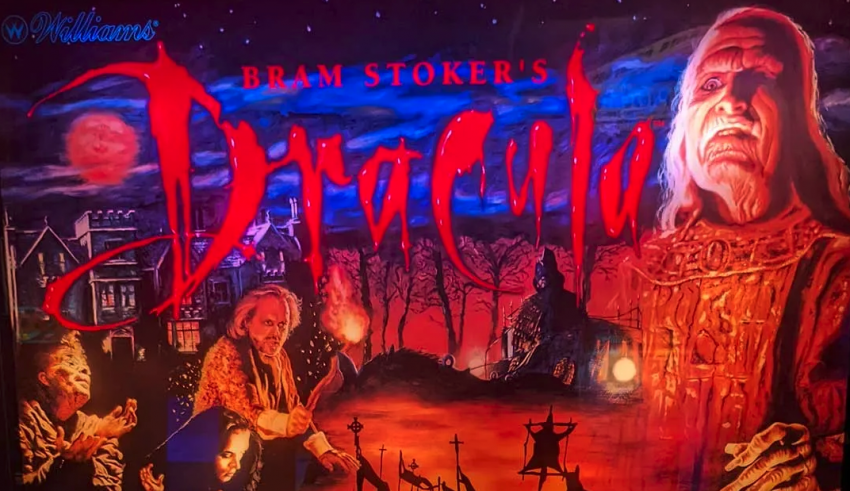 If you’re a fan of horror and pinball machines, like myself, then you probably really like horror themed pinball machines. In a new category of posts, I am getting into machines that I have played myself. The first one being the Bram Stoker’s Dracula Pinball Machine from Williams, released in 1993.

The film Bram Stoker’s Dracula hit screens in 1992. I remember seeing it in theaters, and it was a truly amazing film. I specifically remember the movie theater having a creepy looking Dracula display in front of the theater. They had a life size coffin and recreation of Gary Oldman in his old Dracula form. However, I had not played the pinball machine for the movie until recently. The Internet Pinball Database lists that 6,801 units were produced.

Dracula’s voice narrates your actions and one of my favorite parts is when the ball save is activated and he says that love never dies (although I assure you, that ball save won’t last forever). It has a blood red DMD (Dot Matrix Display) which was unusual for the time, since orange tended to be used.

A major complaint was that there just isn’t enough going on and there is too much dead space in the middle. The mystery prize can be a bit worthless at times, but the mist multiball is interesting, since there is a magnet underneath one of the balls that drags it across the board, which you have to hit with another ball to shake loose. There is also a really cool effect where Dracula’s coffin lights up. If you can hit the ramps effectively, get a few different multiballs going at once, and avoid the death trap bumpers in the middle of the board, I still find this a very fun game.